From Wikipedia, the free encyclopedia
This is the latest accepted revision, reviewed on 12 October 2020.
Jump to navigation Jump to search
American actor

Bradford Claude Dourif[1] (/ˈdɔːrɪf/; born March 18, 1950) is an American character actor. He was nominated for an Oscar, and won Golden Globe and BAFTA Awards for his supporting role as Billy Bibbit in the film One Flew Over the Cuckoo's Nest (1975). He is also known for his roles as Charles Lee Ray and the voice of Chucky in the Child's Play franchise (1988–2017), and Gríma Wormtongue in The Lord of the Rings series (2002–2003).

Dourif was born in Huntington, West Virginia, on March 18, 1950, to Joan Mavis Felton (née Bradford), an actress, and Jean Henri Dourif, an art collector who owned and operated a dye factory.[2][3] His stepfather was golfer William C. Campbell.[4] Dourif was one of four siblings, with sisters Diana, Patricia and Christiane.[4]

His paternal grandparents emigrated from France, and his paternal grandfather co-founded the Standard Ultramarine and Color Company in Huntington.[5] After Aiken, he attended Fountain Valley School in Colorado Springs, Colorado, graduating in 1968. Dourif appeared as an amateur at the Fountain Valley Film Festival in 1969, taking second place in the 8 mm film category with his 10-minute entry "Blind Date."[6] Dourif attended Marshall University for a time, before quitting college and moving to New York City to study acting on the advice of actress Conchata Ferrell.[7]

Starting in school productions, Dourif progressed to community theater, joining up with the Huntington Community Players while attending Marshall University. In New York City, he studied with Sanford Meisner, and worked with Marshall Mason and Lanford Wilson at the Circle Repertory Company. During the early 1970's, Dourif appeared in a number of plays, off-Broadway and at Woodstock, New York, including The Ghost Sonata, The Doctor in Spite of Himself, and When You Comin' Back, Red Ryder?, in which he was spotted by director Miloš Forman[7] who cast him in One Flew Over the Cuckoo's Nest (1975).

In 2013, after a three-decade absence from the stage, Dourif chose to star alongside Amanda Plummer in the Off-Broadway revival of Tennessee Williams' The Two-Character Play that played to critical acclaim at the New World Stages.[8] He explained, in a filmed interview released by the producers, why he broke his 29-year hiatus from acting in live theater: "I hated the stage, did not want to do it. And then somebody said, 'Will you do a play? It's with Amanda Plummer', and I said, 'Oh shit! No. Oh God, I'm gonna have to do this...'".[9] It opened on June 10, 2013 and closed on September 29, 2013.[10] The play was subject to a number of performance cancellations, one relating to Dourif's absence due to a death in the family. Plummer refused to perform without Dourif, notwithstanding the presence of an understudy.[11] 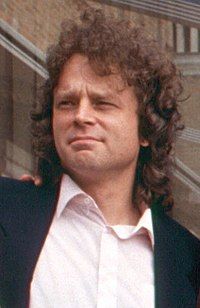 Although One Flew Over the Cuckoo's Nest is frequently cited as Dourif's film debut, his first acting for screen was in a low-budget film called Split, which was never released.[citation needed] He followed this with a role in the film W.W. and the Dixie Dancekings (1975), but his bit part was omitted from the final cut of the film.[12] His portrayal of the vulnerable Billy Bibbit in Cuckoo's Nest ended up being his big break, earning him a Golden Globe Award (Best Actor Debut) and a British Academy Award (Supporting Actor) as well as a nomination for Academy Award for Best Supporting Actor.[7]

In 1981, Vincent Canby listed Dourif as one of twelve actors to watch, calling Dourif "one of the most intense, most interesting young film actors of his generation."[13] Dourif returned to New York, where he continued in theater and taught acting and directing classes at Columbia University until 1988, when he moved to Hollywood.[citation needed]

Dourif has appeared in a number of horror films, most notably as the voice of Chucky in the Child's Play franchise. He portrayed the Gemini Killer in The Exorcist III (1990) and appeared in Death Machine (1994) and Alien Resurrection (1997). He later appeared as Sheriff Lee Brackett in Rob Zombie's Halloween (2007) and Halloween II (2009). In 2013, Dourif reprised his role as Chucky in the sixth installment of the Child's Play franchise, Curse of Chucky, and then again in the 2017 sequel, Cult of Chucky, both of which were straight-to-DVD releases. His daughter, Fiona Dourif, also starred with him in both films.

In 1984, Dourif played a suspected serial killer in the episode "Number Eight" of Tales of the Unexpected. In 1994, he appeared in The X-Files episode "Beyond the Sea" as the psychic serial killer Luther Lee Boggs. He also portrayed Lon Suder in a three episode story arc on Star Trek: Voyager and guest starred as a troubled monk haunted by visions in Babylon 5. Dourif later gained acclaim as Doc Cochran in Deadwood, receiving a 2004 Emmy Award nomination for Outstanding Supporting Actor in a Drama Series.

In 2012, Dourif contributed spoken word vocals to three songs on the album Misery Together by the Norwegian duo Thinguma*jigSaw.[16] Dourif also appears in the music videos for "Stranger in Town" (1984) by Toto and "Drinking from the Bottle" (2012) by Calvin Harris.