Cory Efram Doctorow (/ˈkɒri ˈdɒktəroʊ/; born July 17, 1971) is a Canadian-British blogger, journalist, and science fiction author who served as co-editor of the blog Boing Boing. He is an activist in favour of liberalising copyright laws and a proponent of the Creative Commons organization, using some of their licences for his books. Some common themes of his work include digital rights management, file sharing, and post-scarcity economics.[1]

Cory Efram Doctorow was born in Toronto, Ontario on 17 July 1971.[2] He is of Eastern European descent. His paternal grandfather was born in what is now Poland and his paternal grandmother was from Leningrad. Both were deserters from the Red Army, and as a result Doctorow's father was born in a displaced persons camp near Baku, Azerbaijan.[3] His grandparents and father emigrated to Canada from the Soviet Union.[4] Doctorow's mother's family were Ukrainian-Russian Romanians.[4]

Doctorow was a friend of Columbia law professor Tim Wu, dating to their time together in elementary school.[5] Doctorow went to summer camp as a young teenager at what he has described as a "hippy summer camp" at Grindstone Island, near Portland, Ontario, that was influential on his intellectual life and development.[6] He quit high school,[7][verification needed] received his Ontario Academic Credit (high school diploma) from the SEED School in Toronto,[citation needed] and attended four universities without obtaining a degree.[8]

In June 1999, Doctorow co-founded the free software P2P company Opencola with John Henson and Grad Conn,[citation needed] which sold to the Open Text Corporation of Waterloo, Ontario in the summer of 2003.[1][third-party source needed] The company used a drink called OpenCola as part of its promotional campaign.[10] 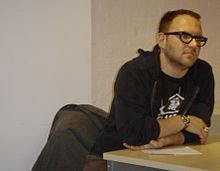 Play media
Doctorow, a member of the Open Rights Group's Advisory Council speaks about how he got involved in digital rights.

Doctorow later relocated to London and worked as European Affairs Coordinator for the Electronic Frontier Foundation for four years,[1][third-party source needed] helping to establish the Open Rights Group, before leaving the EFF to pursue writing full-time in January 2006;[citation needed] Doctorow remained a Fellow of the EFF for some time after his departure from the EFF Staff.[1][11] He was named the 2006–2007 Canadian Fulbright Chair for Public Diplomacy at the USC Center on Public Diplomacy, sponsored jointly by the Royal Fulbright Commission,[12] the Integrated Media Systems Center, and the USC Center on Public Diplomacy.[citation needed] The professorship included a one-year writing and teaching residency at the University of Southern California in Los Angeles, United States.[1][13] He then returned to London,[when?] but remained a frequent public speaker on copyright issues.[citation needed]

In 2009, Doctorow became the first Independent Studies Scholar in Virtual Residence at the University of Waterloo in Ontario.[14] He was a student in the program during 1993–94, but left without completing a thesis.[citation needed] Doctorow is also a Visiting Professor at the Open University in the United Kingdom.[when?][14] In 2012 he was awarded an honorary doctorate from The Open University.[15]

In 2015, Doctorow decided to leave London and move to Los Angeles, expressing disappointment at London's "death" after Britain's choice of Conservative government; he stated at the time, "London is a city whose two priorities are being a playground for corrupt global elites who turn neighbourhoods into soulless collections of empty safe-deposit boxes in the sky, and encouraging the feckless criminality of the finance industry. These two facts are not unrelated."[18] He rejoined the EFF in January 2015 to campaign for the eradication of digital rights management (DRM).[19]

Doctorow left Boing Boing in January 2020, and soon started a solo blogging project titled Pluralistic.[20] The circumstances surrounding Doctorow's exit from the website were unclear at the time, although Doctorow acknowledged that he remained a co-owner of Boing Boing.[20][21] Given end of the 19-year association between Doctorow and Boing Boing, MetaFilter described this news as "the equivalent of the Beatles breaking up" for the blog world.[21] Doctorow's exit was not acknowledged by Boing Boing, with his name being quietly removed from the list of editors on 29 January 2020.[22]

Other work, activism, and fellowships[edit] Doctorow served as Canadian Regional Director of the Science Fiction and Fantasy Writers of America in 1999.

In 2007, together with Austrian art group monochrom, he initiated the Instant Blitz Copy Fight project, which asks people from all over the world to take flash pictures of copyright warnings in movie theaters.[23][24]

On October 31, 2005, Doctorow was involved in a controversy concerning digital rights management with Sony-BMG, as told in Wikinomics.[25]

As a user of the Tor anonymity network for more than a decade during his global travels, Doctorow publicly supports the network; furthermore, Boing Boing operates a "high speed, high-quality exit node."[26]

Doctorow was the keynote speaker at the July 2016 Hackers on Planet Earth conference.[27][28] Cory Doctorow at the Singularity Summit at Stanford in 2006

Doctorow began selling fiction when he was 17 years old, and sold several stories, followed by publication of the story "Craphound" in 1998.[7][verification needed]

Down and Out in the Magic Kingdom, Doctorow's first novel, was published in January 2003, and was the first novel released under one of the Creative Commons licences, allowing readers to circulate the electronic edition as long as they neither made money from it nor used it to create derived works.[citation needed] The electronic edition was released simultaneously with the print edition.[citation needed] In March 2003, it was re-released with a different Creative Commons licence that allowed derivative works such as fan fiction, but still prohibited commercial usage.[citation needed]

His novel Someone Comes to Town, Someone Leaves Town, published in June 2005, was chosen to launch the Sci-Fi Channel's book club, Sci-Fi Essentials (now defunct).[citation needed]

Doctorow's other novels have been released with Creative Commons licences that allow derived works and prohibit commercial usage, and he has used the model of making digital versions available, without charge, at the same time that print versions are published.[citation needed]

His Sunburst Award-winning short story collection[32] A Place So Foreign and Eight More was also published in 2004: "0wnz0red" from this collection was nominated for the 2004 Nebula Award for Best Novelette.[33] 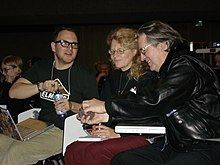 Doctorow released the bestselling novel Little Brother in 2008 with a Creative Commons Attribution-Noncommercial-ShareAlike licence.[citation needed] It was nominated for a Hugo Award for Best Novel in 2009.[34] and won the 2009 Prometheus Award,[35] Sunburst Award,[36] and the 2009 John W. Campbell Memorial Award.[37]

His novel Makers was released in October 2009, and was serialised for free on the Tor Books website.[38]

Doctorow released another young adult novel, For the Win, in May 2010.[7][verification needed] The novel is available free on the author's website as a Creative Commons download, and is also published in traditional paper format by Tor Books. The book is about "greenfarming", and concerns massively multiplayer online role-playing games.[citation needed]

Doctorow's short story collection "With a Little Help" was released in printed format on May 3, 2011. It is a project to demonstrate the profitability of Doctorow's method of releasing his books in print and subsequently for free under Creative Commons.[39][40]

In September 2012, Doctorow released The Rapture of the Nerds, a novel written in collaboration with Charles Stross.[41]

In February 2013, Doctorow released Homeland, the sequel to his novel Little Brother.[43] It won the 2014 Prometheus Award (Doctorow's third novel to win this award).

In March 2019, Doctorow released Radicalized, a collection of four self-contained science-fiction novellas dealing with how life in America could be in the near future.[45] The book was selected for the 2020 edition of Canada Reads, in which it was defended by Akil Augustine.[46]

In 2004, he wrote an essay on Wikipedia included in The Anthology at the End of the Universe, comparing Internet attempts at Hitchhiker's Guide-type resources, including a discussion of the Wikipedia article about himself.[citation needed] Doctorow contributed the foreword to Sound Unbound: Sampling Digital Music and Culture (The MIT Press, 2008) edited by Paul D. Miller a.k.a. DJ Spooky. He also was a contributing writer to the book Worldchanging: A User's Guide for the 21st Century.[49][clarification needed][third-party source needed]

He popularised the term "metacrap" by a 2001 essay titled "Metacrap: Putting the torch to seven straw-men of the meta-utopia."[50] Some of his non-fiction published between 2001 and 2007 has been collected by Tachyon Publications as Content: Selected Essays on Technology, Creativity, Copyright, and the Future of the Future. In 2016 he wrote the article Mr. Robot Killed the Hollywood-Hacker (published on MIT Technology Review) as a review of the TV show Mr. Robot and argued for a better portrayal and understanding of technology, computers and their risks and consequences in our modern world.[51]

His essay "You Can't Own Knowledge" is included in the Freesouls book project.[52]

Play media
Doctorow speaking on the public domain in the United States at the Internet Archive in 2019.

Doctorow is an opponent of digital rights management and claims that it limits the free sharing of digital media and frequently causes problems for legitimate users (including registration problems that lock users out of their own purchases and prevent them from being able to move their media to other devices).[60]

He was a keynote speaker at the 2014 international conference CopyCamp in Warsaw[61] with the presentation "Information Doesn't Want to Be Free."[62]

Cory Doctorow wears a red cape, goggles and a balloon as he receives the 2007 EFF Pioneer Award, spoofing an xkcd webcomic in which he is mentioned.[63]

The webcomic 'xkcd' occasionally features a partially fictional version of Doctorow who lives in a hot air balloon up in the "blogosphere" ("above the tag clouds") and wears a red cape and goggles, such as in the comic "Blagofaire".[64] When Doctorow won the 2007 EFF Pioneer Award, the presenters gave him a red cape, goggles and a balloon.[65]

The novel Ready Player One features a mention of Doctorow as being the newly re-elected President of the OASIS User Council (with Wil Wheaton as his vice-president) in the year 2044, saying that, "those two geezers had been doing a kick-ass job of protecting user rights for over a decade."[66]

The comedic role-playing game Kingdom of Loathing features a boss-fight against a monster named Doctor Oh who is described as wearing a red cape and goggles.[67] The commentary before the fight and assorted hit, miss and fumble messages during the battle make reference to Doctorow's advocacy for open-source sharing and freedom of media.

In chronological sequence, unless otherwise indicated 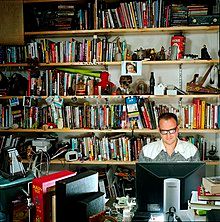 Doctorow in his office
This list is incomplete; you can help by adding missing items with reliable sources.

Listen to this article (17 minutes)

This audio file was created from a revision of this article dated 3 November 2018 (2018-11-03), and does not reflect subsequent edits.
(Audio help · More spoken articles)
Retrieved from "https://en-wiki.kfd.me/w/index.php?title=Cory_Doctorow&oldid=1002111871"
Categories:
Hidden categories: