From Wikipedia, the free encyclopedia
Jump to navigation Jump to search
Characters that specify the boundary between regions in a data stream
This article is about delimiters in computing. For delimiters in human use, see Word divider and digit grouping. 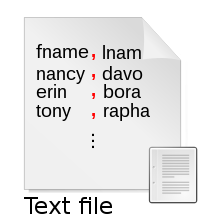 A stylistic depiction of a fragment from a CSV-formatted text file. The commas (shown in red) are used as field delimiters.

In mathematics, delimiters are often used to specify the scope of an operation, and can occur both as isolated symbols (e.g., colon in "

") and as a pair of opposing-looking symbols (e.g., angled brackets in

Delimiters represent one of various means of specifying boundaries in a data stream. Declarative notation, for example, is an alternate method that uses a length field at the start of a data stream to specify the number of characters that the data stream contains.[4]

Delimiters may be characterized as field and record delimiters, or as bracket delimiters.

Common examples of bracket delimiters include:[8]

Delimiter collision is a problem that occurs when an author or programmer introduces delimiters into text without actually intending them to be interpreted as boundaries between separate regions.[5][19] In the case of XML, for example, this can occur whenever an author attempts to specify an angle bracket character.

In some contexts, a malicious user or attacker may seek to exploit this problem intentionally. Consequently, delimiter collision can be the source of security vulnerabilities and exploits. Malicious users can take advantage of delimiter collision in languages such as SQL and HTML to deploy such well-known attacks as SQL injection and cross-site scripting, respectively.

Because delimiter collision is a very common problem, various methods for avoiding it have been invented. Some authors may attempt to avoid the problem by choosing a delimiter character (or sequence of characters) that is not likely to appear in the data stream itself. This ad hoc approach may be suitable, but it necessarily depends on a correct guess of what will appear in the data stream, and offers no security against malicious collisions. Other, more formal conventions are therefore applied as well.

The ASCII and Unicode character sets were designed to solve this problem by the provision of non-printing characters that can be used as delimiters. These are the range from ASCII 28 to 31.

The use of ASCII 31 Unit separator as a field separator and ASCII 30 Record separator solves the problem of both field and record delimiters that appear in a text data stream.[20]

One method for avoiding delimiter collision is to use escape characters. From a language design standpoint, these are adequate, but they have drawbacks:

Escape sequences are similar to escape characters, except they usually consist of some kind of mnemonic instead of just a single character. One use is in string literals that include a doublequote (") character. For example in Perl, the code:

produces the same output as:

One drawback of escape sequences, when used by people, is the need to memorize the codes that represent individual characters (see also: character entity reference, numeric character reference).

In contrast to escape sequences and escape characters, dual delimiters provide yet another way to avoid delimiter collision. Some languages, for example, allow the use of either a single quote (') or a double quote (") to specify a string literal. For example, in Perl:

produces the desired output without requiring escapes. This approach, however, only works when the string does not contain both types of quotation marks.

In contrast to escape sequences and escape characters, padding delimiters provide yet another way to avoid delimiter collision. Visual Basic, for example, uses double quotes as delimiters. This is similar to escaping the delimiter.

produces the desired output without requiring escapes. Like regular escaping it can, however, become confusing when many quotes are used. The code to print the above source code would look more confusing:

In contrast to dual delimiters, multiple delimiters are even more flexible for avoiding delimiter collision.[8]: 63 </ref>

For example, in Perl:

all produce the desired output through use of quote operators, which allow any convenient character to act as a delimiter. Although this method is more flexible, few languages support it. Perl and Ruby are two that do.[8]: 62 </ref>[22]

A content boundary is a special type of delimiter that is specifically designed to resist delimiter collision. It works by allowing the author to specify a sequence of characters that is guaranteed to always indicate a boundary between parts in a multi-part message, with no other possible interpretation.[23]

The delimiter is frequently generated from a random sequence of characters that is statistically improbable to occur in the content. This may be followed by an identifying mark such as a UUID, a timestamp, or some other distinguishing mark. Alternatively, the content may be scanned to guarantee that a delimiter does not appear in the text. This may allow the delimiter to be shorter or simpler, and increase the human readability of the document. (See e.g., MIME, Here documents).

Some programming and computer languages allow the use of whitespace delimiters or indentation as a means of specifying boundaries between independent regions in text.[24]

In specifying a regular expression, alternate delimiters may also be used to simplify the syntax for match and substitution operations in Perl.[25]

For example, a simple match operation may be specified in Perl with the following syntax:

The syntax is flexible enough to specify match operations with alternate delimiters, making it easy to avoid delimiter collision:

Here is an example in perl:

This code would print:

By using a special end sequence all manner of characters are allowed in the string.

Although principally used as a mechanism for text encoding of binary data, ASCII armoring is a programming and systems administration technique that also helps to avoid delimiter collision in some circumstances.[27][28] This technique is contrasted from the other approaches described above because it is more complicated, and therefore not suitable for small applications and simple data storage formats. The technique employs a special encoding scheme, such as base64, to ensure that delimiter or other significant characters do not appear in transmitted data. The purpose is to prevent multilayered escaping, i.e. for doublequotes.

This technique is used, for example, in Microsoft's ASP.NET web development technology, and is closely associated with the "VIEWSTATE" component of that system.[29]

The following simplified example demonstrates how this technique works in practice.

The first code fragment shows a simple HTML tag in which the VIEWSTATE value contains characters that are incompatible with the delimiters of the HTML tag itself:

This first code fragment is not well-formed, and would therefore not work properly in a "real world" deployed system.

To store arbitrary text in an HTML attribute, HTML entities can be used. In this case "&quot;" stands in for the double-quote:

Alternatively, any encoding could be used that doesn't include characters that have special meaning in the context, such as base64:

This prevents delimiter collision and ensures that incompatible characters will not appear inside the HTML code, regardless of what characters appear in the original (decoded) text.[29]