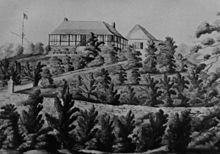 The squadron was formed in 1745 to counter French forces in North America, with the headquarters at the Halifax Naval Yard in Nova Scotia (now CFB Halifax).[1]

The area of command had first been designated as the North American Station in 1767, under the command of Commodore Samuel Hood, with the headquarters in Halifax from 1758 to 1794, and thereafter in Halifax and Bermuda. Land and buildings for a permanent Naval Yard were purchased by the Royal Navy in 1758 and the Yard was officially commissioned in 1759. The Yard served as the main base for the Royal Navy in North America during the Seven Years' War, the American Revolution, and the French Revolutionary Wars.[2]

Following American independence in 1783, Bermuda was the only British territory left between Nova Scotia and the West Indies (by agreement with the Spanish government, a Royal Navy base was maintained in Florida until this was ceded to the United States), and was selected as the new headquarters for the region. The establishment of a base there was delayed for a dozen years, however, due to the need to survey the encircling barrier reef to locate channels suitable for large warships. Once this had been completed, a base was established at St. George's in 1794, with the fleet anchoring at Murray's Anchorage in the northern lagoon, named for Vice Admiral Sir George Murray, who became the Commander-in-Chief of the new River St. Lawrence and Coast of America and North America and West Indies Station. The Admiralty also began purchasing land at Bermuda's West End, including Ireland Island, Spanish Point, and smaller islands in the Great Sound with the intent of building the Royal Naval Dockyard, Bermuda, and a permanent naval base there, with its anchorage on Grassy Bay. The construction of this base was to drag on through much of the Nineteenth Century.[3]

Admiral Sir John Borlase Warren was appointed Commander-in-Chief in 1812, and he and his staff seem to have spent most of their time at Bermuda during the War of 1812 (he was replaced by Vice Admiral Sir Alexander Inglis Cochrane in 1813), from where the blockade of much of the Atlantic Seaboard of the United States was orchestrated, and the punitive expedition which included the Raid on Alexandria, the Battle of Bladensburg, and the Burning of Washington was launched in August, 1814.[4]

In 1813, the area of command had become the North America Station again, with the West Indies falling under the Jamaica Station, and in 1816 it was renamed the North America and Lakes of Canada Station. The headquarters was initially in Bermuda during the winter and Halifax during the summer, but Admiralty House, Bermuda, became the year-round headquarters of the Station in 1821, when the area of command became the North America and Newfoundland Station. In 1818 Halifax became the summer base for the squadron which shifted to the Royal Naval Dockyard, Bermuda, for the remainder of the year.[5] 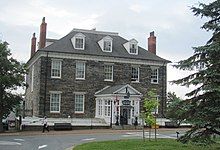 Admiralty House, Halifax, summer headquarters of the Admiral in command of the station

In 1819, the main base of the Station was moved from Halifax to Bermuda, which was better positioned to counter threats from the United States.[2][6][5][7][8] Halifax continued to be used as the summer base for the station until 1907.[9]

The Grassy Bay anchorage seen from HMD Bermuda in 1865

In 1951, the Royal Naval Dockyard, Bermuda, was closed, with the Admiralty Floating Dock No. 5 towed to Britain by HM Tugs Warden and Reward, departing on 11 July. The position of Senior Naval Officer West Indies (SNOWI) was established as a Sub-Area Commander under the Commander-in-Chief of the America and West Indies station. The occupant of this position was a commodore, and was provided with a shore office on Ireland Island (which was beside the Victualling Yard until 1962), but was required to spend much of his time at sea in the West Indies. A flagship (between 1951 and April, 1956, this was successively HMS Sheffield, HMS Superb, HMS Sheffield, HMS Kenya) and other vessels of the America and West Indies Squadron continued to be based at the South Yard of the former Royal Naval Dockyard, where the Royal Navy maintained a Berthing Area under the command of a Resident Naval Officer (RNO), but were detached from the Home Fleet, and their refits and repairs were thenceforth to be carried out in Britain.[15][16][17] The RNO had his own office in one of the houses of Dockyard Terrace. Admiralty land not required for the continued naval operations was sold to the colonial government.[8] There was also an RNO in Nassau.[18]

Grassy Bay, the anchorage for the fleet in Bermuda between 1816 and 1956, with the Royal Naval Dockyard in the background

All remaining Admiralty land, including, Admiralty House at Clarence Hill and Ireland Island, along with and War Department lands, were sold to the colonial government between 1957 and 1965. That part of the dockyard still required for naval operations remained under Admiralty control under a ninety-nine year lease, and the South Yard Berthing Area was commissioned on 1 June 1965, as HMS Malabar, under the command of the RNO, with the headquarters of SNOWI and the RNO in Moresby House (originally built in the 1899s as the residence of the civilian Officer in Charge, Works).[2] In December, 1967, the position of RNO Bermuda was abolished, with its duties passing to SNOWI's secretary and SNOWI taking over command of HMS Malabar. As SNOWI was frequently in the West Indies, he was unable to effectively command HMS Malabar and a Lieutenant-Commander was consequently appointed to the roles of Commanding Officer of HMS Malabar and RNO in 1971.[18]

While Bermuda had been the ideal base of operations for the North America and West Indies Station, at a thousand miles north of the Virgin Islands, it was far too distant to serve as an effective headquarters for only the West Indies. This meant that both SNOWI and the Station Frigates spent little time in or near Bermuda. On 1 April 1976, the post of SNOWI was abolished, and the Station Frigates were withdrawn. The RNO and his staff remained, and a frigate was appointed West Indies Guardship, but seldom visited Bermuda. HMS Malabar ceased to be a base and was rated only as a supply station.[2]

By 1995, when Malabar was handed over to the Government of Bermuda,[21][22][23] the Royal Naval presence in the North-Western Atlantic and Caribbean had been reduced to the West Indies Guard Ship (now called Atlantic Patrol Task (North)), a role which was rotated among the frigates of the fleet, which took turns operating extended patrols of the West Indies.[24] 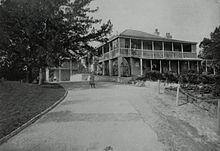 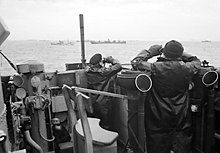 On lookout for U-boats in the Battle of the Atlantic, October 1941

After the end of the Second World War the former name of the station was restored.[32]