From Wikipedia, the free encyclopedia
Jump to navigation Jump to search
British actor

Roderick Andrew Anthony Jude McDowall (17 September 1928 – 3 October 1998) was a British-born American actor, film director and photographer. He is best known for portraying Cornelius and Caesar in the original Planet of the Apes film series, as well as Galen in the spin-off television series. He began his acting career as a child in England, and then in the United States, in How Green Was My Valley (1941), My Friend Flicka (1943) and Lassie Come Home (1943).

As an adult, McDowall appeared most frequently as a character actor on radio, stage, film, and television. For portraying Augustus in the historical drama Cleopatra (1963), he was nominated for a Golden Globe Award. Other titles include The Longest Day (1962), The Greatest Story Ever Told (1965), That Darn Cat! (1965), Inside Daisy Clover (1965), Bedknobs and Broomsticks (1971), The Poseidon Adventure (1972), Funny Lady (1975), The Black Hole (1979), Class of 1984 (1982), Fright Night (1985), Overboard (1987), Fright Night Part 2 (1988), Shakma (1990), and A Bug's Life (1998). He also served in various positions on the Board of Governors for the Academy of Motion Picture Arts and Sciences and the Selection Committee for the Kennedy Center Honors, further contributing to various charities related to the film industry and film preservation. He was a founding Member of the National Film Preservation Board in 1989, and represented the Screen Actors Guild on this Board until his death.

McDowall was born at 204 Herne Hill Road, Herne Hill, London, the only son of Scottish-born Thomas Andrew McDowall (1896–1978), a merchant seaman, and his Irish wife Winifred (née Corcoran).[1][2][3] Both of his parents were enthusiastic about the theatre. He and his elder sister, Virginia, were raised in their mother's Catholic faith. He attended St Joseph's College, Beulah Hill, Upper Norwood, a Roman Catholic secondary school in London.[4]

Appearing as a child model as a baby, McDowall appeared in several films as a boy. After winning an acting prize in a school play at age nine, he started appearing in films: Murder in the Family (1938), I See Ice (1938) with George Formby, John Halifax (1938) and Scruffy (1938).[5]

McDowall's American career began with a part in the 1941 thriller Man Hunt, directed by Fritz Lang. It was made by 20th Century Fox who also produced McDowall's next film How Green Was My Valley (1941), where he met and became lifelong friends with actress Maureen O'Hara. The film won the Academy Award for Best Picture, and McDowall's role as Huw Morgan made him a household name.[5] Fox promoted McDowall to top billing for On the Sunny Side (1942). He was billed second to Monty Woolley in The Pied Piper (1942), playing a war orphan, then he had top billing again for an adaptation of My Friend Flicka (1942).

Metro-Goldwyn-Mayer borrowed McDowall for the star role in Lassie Come Home (1943), a film that introduced an actress who would become another lifelong friend, Elizabeth Taylor. MGM kept him on to play a leading role in The White Cliffs of Dover (1944).

Back at Fox he played Gregory Peck as a young man in The Keys of the Kingdom (1944). In 1944, exhibitors voted McDowall the number four "Star of Tomorrow".[6]

Fox gave McDowall another starring vehicle, Thunderhead – Son of Flicka (1945). They reunited him with Woolley in Molly and Me (1945), which was made as an attempt to turn Gracie Fields into a Hollywood star.

McDowall went back to MGM to support Walter Pidgeon in Holiday in Mexico (1946).

McDowall turned to the theatre, taking the title role of Young Woodley in a summer stock production in Westport, Connecticut in July 1946.[7]

In 1947, he played Malcolm in Orson Welles's stage production of Macbeth in Salt Lake City, and played the same role in the actor-director's film version in 1948.[5] McDowall then signed a three-year contract with Monogram Pictures, a low-budget studio that welcomed established stars, to make two films a year.[8]

McDowall starred in seven films for them, for which he also worked as associate producer: Rocky (1948), a boy and dog story directed by Phil Karlson; Kidnapped (1948), an adaptation of the Robert Louis Stevenson story, where he played David Balfour, directed by William Beaudine; Tuna Clipper (1949), a fishing tale, again directed by Beaudine; Black Midnight (1949), a horse story directed by Budd Boetticher; Killer Shark (1950), a shark hunting tale, again with Boetticher; Big Timber (1950), as a logger; The Steel Fist (1952), an anti-communist drama.[9]

McDowall also had significant success on the Broadway stage. He was in a production of Misalliance (1953) that ran for 130 performances and which McDowall said "broke the mould" in how he was judged as an actor.[10]

He had a big critical success with Compulsion (1957–58) based on Leopold and Loeb – although McDowall was not cast in the film version. He followed it with Handful of Fire (1958), Noël Coward's Look After Lulu! (1959) and Peter Brook's The Fighting Cock (1960). The latter earned him a Tony Award. McDowall as Mordred in the Broadway musical Camelot (1960)

McDowall was in another big Broadway hit when he played Mordred in the musical Camelot (1960–63) with Julie Andrews and Richard Burton.[12]

He played Ariel in a TV production of The Tempest (1960) with Richard Burton and Maurice Evans,[13] then appeared in his first Hollywood movie in almost a decade, The Subterraneans (1960). He followed it with Midnight Lace (1960).

McDowall continued to work on television in shows such as Sunday Showcase, Naked City, and Play of the Week. He was in a TV production of The Power and the Glory (1961) with Laurence Olivier, George C. Scott and Julie Harris.

In 1963, McDowall appeared as Octavian in the film production of Cleopatra, which starred Elizabeth Taylor. While filming in Europe, he appeared in Fox's war movie The Longest Day (1963). He continued to guest on television series such as Arrest and Trial, The Alfred Hitchcock Hour, The Eleventh Hour, Kraft Suspense Theatre, Combat!, Ben Casey, Twelve O'Clock High, Run for Your Life, The Invaders, and appeared as a Special Guest Villain as The Bookworm on Batman. McDowall in full costume, with co-stars Ron Harper (front) and James Naughton (back), in the Planet of the Apes TV series (1974)

In 1968, McDowall appeared in one of his memorable roles when he was cast in Planet of the Apes as the ape Cornelius. He would later go on to appear in three sequels and a TV spin-off from the film.

Asked about his career in a 1975 interview, McDowall said "I just hope to keep working and in interesting things."[18]

McDowall began to play many voice over roles, such as Zoo Ship (1985), GoBots: Battle of the Rock Lords (1986), and The Wind in the Willows (1987). TV series included Bridges to Cross (1986) (in which McDowall was a regular), The Wizard, Murder, She Wrote, Matlock, and Nightmare Classics, and TV movies included Remo Williams: The Prophecy and Around the World in 80 Days (1989).

In 1989 he said "I feel as Henry Fonda did that every job I get may be my last. I'm one of those creatures born to be working. I feel better when I'm working. I don't like it when I'm not working and I've never worked as much as I want to."[19] 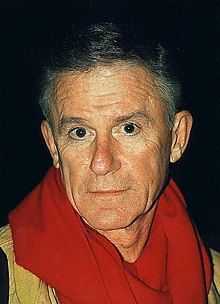 In 1997, McDowall hosted the MGM Musicals Tribute at Carnegie Hall.

McDowall served for several years in various capacities on the Board of Governors of the Academy of Motion Picture Arts and Sciences, the organisation that presents the Oscar Awards, and on the selection committee for the Kennedy Center Awards. He was Chairman of the Actors' Branch for five terms. He was elected President of the Academy Foundation in 1998, the year that he died. He worked to support the Motion Pictures Retirement Home, where a rose garden named in his honour was officially dedicated on 9 October 2001 and remains a part of the campus.[20]

McDowall received recognition as a photographer, working with Look, Vogue, Collier's, and Life. His work includes a cover story on Mae West for Life and the cover of the 1964 Barbra Streisand album, The Third Album. He took the photograph when Streisand performed on the Judy Garland television show in October, 1963.

He published five books of photographs, each featuring photos and profile interviews of his celebrity friends interviewing each other, such as Elizabeth Taylor, Judy Garland, Judy Holliday, Maureen O'Hara, Katharine Hepburn, Lauren Bacall, and others. It started with Double Exposure in 1968.[21][22]

Although McDowall made no public statements about his sexual orientation during his lifetime, several authors have claimed that he was discreetly homosexual.[23][24]

McDowall was a Democrat and was supportive of Adlai Stevenson's campaign during the 1952 presidential election.[25]

In the spring and summer of 1965, while working on Inside Daisy Clover, McDowall made 8mm movies on-set and in Malibu, California, of the cast and his friends; long after his death they were transferred to video and uploaded to YouTube.[26][27]

In 1974, the FBI raided McDowall's home and seized his collection of films and television series in the course of an investigation into film piracy and copyright infringement. His collection consisted of 160 16-mm prints and more than 1,000 video cassettes, at a time before the era of commercial videotapes, when there was no legal aftermarket for films. McDowall had purchased Errol Flynn's home cinema films and transferred them all to tape for longer-lasting archival storage. No charges were filed.[28]

On 3 October 1998, at age 70, McDowall died of lung cancer at his home in Los Angeles.[29] His body was cremated and his ashes were scattered into the Pacific Ocean on 7 October 1998 off Los Angeles County.[30] Dennis Osborne, a screenwriter, had cared for the actor in his final months. The media quoted Osborne as having said, "It was very peaceful. It was just as he wanted it. It was exactly the way he planned."[31]