The National Plan of Integrated Airport Systems for 2017–2021 called it a "small hub" airport since it enplanes 0.05 percent to 0.25 percent of total U.S. passenger enplanements.[6]

The airport was considered a replacement to Lowe Field's poor conditions and low capacity. Construction on the Sarasota-Bradenton Airport started in 1939 and opened the following year with CCC and WPA assistance at a cost of $1 million. In May 1941, the Sarasota Manatee Airport Authority was created.[9][10]

In the 1940s, SRQ was known by its two-character designation, RS. By 1948, growth in aviation demand prompted IATA to coordinate the assignment of three-character codes. The airport initially received the designation "SSO", a short-lived code subject to misinterpretation as the international distress signal, SOS. SRQ was chosen, with "Q" serving as filler text.[11] The airport's IATA airport code, "SRQ", is used as a general nickname for the city of Sarasota and Sarasota area, as exemplified by media outlets like SRQ Magazine,[12] WSRQ radio,[13] and numerous local businesses in the area that include SRQ in their names.

In 1942 with the United States entering World War 2 the airport was leased to the Army Air Corps and became known as the Sarasota Army Airfield. The Army Air Corps later added 250 acres making the airport 870 acres. The 97th Bombardment Group was the first group, being transferred from MacDill Air Force Base in Tampa for training with B-17 Flying Fortresses staying from March to May. The 97th as well did construction and maintenance, including the construction of barracks and runway repair.

After the 97th left, the 92nd Operations Group arrived for training and did construction work also. In June the base was designated as a sub base changing its focus from bombers to fighters because the runways could not withstand the bomber's weight. The 69th Fighter Squadron transferred to the airfield from Drew Army Airfield to train with P-39 Airacobras. Sarasota had sub bases in: Bartow, St. Petersburg, Fort Myers, and Tampa. While; Immokalee, Lake Wales, Punta Gorda and Winter Haven served as auxiliary fields for the base. Training was conducted as well on the base, with 70 pilots graduating on average every 30 days.

On July 25, 1945 a Douglas TC-47B that left out of Sarasota to Lake Charles on a navigation training session crashed after going through a thunderstorm north of Tampa. All 13 crew members died onboard and crashed roughly 20 miles northeast of Tampa.[14]

After 3 years of use, the base officially closed and was transferred to civilian usage in 1947.[15] Despite its transfer, the airport and its facilities deteriorated until the Florida Legislature passed the 1955 Sarasota Manatee Airport Authority Act. This act gave the airport more legal power and guidelines to operate.[16][17]

National Airlines was SRQ's first airline, moving from Lowe's Field by 1947. Cancer research institute; Jackson Memorial Laboratories considered establishing a laboratory on airport property. The extent of the plan is not known.[18]

By April 1957, OAG showed six NA departures a day. Construction started on a terminal building designed by Paul Rudolph and locally known architect, John Cromwell on August 18, 1958 and opening on May 2 the next year.[19] with: a control tower, ticketing area, offices, gift shop, coffee shop, and a balcony for passengers to watch their planes arrive. In its opening year of 1959, the airport had roughly 22,000 annual passengers. Eastern arrived in January 1961, along with an air mail service as well.[20] The airport's first jet flights were Eastern 727s in winter 1964–65 (though the longest runway was 5006 ft for a few years after that). By the 1960s the airport along with Eastern and National Airlines, welcomed two commuter airlines: Executive in 1964 and Florida Air in 1968. Executive established Sarasota as a maintenance base and later their headquarters from 1968-1971 and flew flights to Tampa and Fort Myers.[9]

By 1970, the airport had five commercial airlines: Eastern, National, Executive, Florida, and for a brief period, Mackey. Despite its continued growth through the 1970s, many airlines services were intermittent. Mackey and Florida both left in early 1970. Florida returned four years later and simultaneously established Sarasota as its headquarters. When Executive Airlines went bankrupt in 1971, it was replaced by Shawnee Airlines for a year and later returned in 1977. A commuter airline named Sun Airlines had flights to several destinations from mid-1974 to mid-1975. The latter part of the decade introduced North Central Airlines in 1978, and Delta the following year.[21]

During the 1976 presidential election, several candidates would visit and/or fly into the airport. On February 23, 1976 Gerald R. Ford and his family flew into the airport on Air Force One while visiting Sarasota on a trip across Florida. He briefly took questions from the press before leaving to go presumably to a hotel. The following day he went to a church service and a barbecue. He gave a brief press conference before flying out of the airport to Tampa.[22] Next week on March 2, Jimmy Carter held a press conference at the airport before speaking to the public at adjacent New College.[23] George Wallace, also visited the airport next month on March 4th.[24][25]

In the late 1970s and early 1980s, there was a controversial proposal to move the airport by both Sarasota County and Manatee County due to airport overcrowding. An opinion poll was held in 1970 with 66% of voters voting against a new airport.[26] The proposal suggested making the facility into a general aviation airport and constructing a replacement east of future Interstate 75 within Lakewood Ranch.[27][28] However, the airport authority struck down the idea in 1985.[29] In 1989, the facilities were expanded instead.[30]

The airport was designated port of entry status in 1992.[31]

Air Force One was at the airport on September 11, 2001. George W. Bush was at the Emma E. Booker Elementary School in Sarasota when Andrew Card first informed him of the September 11, 2001 attacks at 9:05 AM. Bush returned to the airport. The 747 taxied out at 9:54 AM and took off from runway 14 at 9:55 AM flying first to Barksdale Air Force Base in Louisiana.[32]

Delta Air Lines is the carrier with the largest market share out of SRQ, with flights to Atlanta, New York LaGuardia Airport, Detroit, and Boston. The airport has two fixed-base operators: Rectrix Aviation and Dolphin Aviation.

The current President, CEO is Fredrick "Rick" J. Piccolo. The airport is governed by the Sarasota Manatee Airport Authority. The board is six governor-appointed individuals, three from Sarasota County and three from Manatee County, since the airport has portions in each county.[35]

Terminal B is the main terminal at the airport and contains 13 gates numbered from B1 to B14 (B13 is skipped).

Terminal D is the airport's commuter terminal and contains 4 gates numbered from D1 to D4. It is directly attached to the main airport building with its entrance just to the east end of the ticketing area. It has not been in active use since the mid-2000s. Prior to that time, it served primarily turboprop and small regional jet flights for carriers such as Air Sunshine, American Eagle, and Gulfstream International Airlines. Both Terminal B & D opened on October 29, 1989. 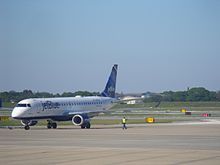 The table lists annual enplanements from the Federal Aviation Administration's Terminal Area Forecast 2011.[52] An enplanement is a revenue generating passenger boarding an aircraft.[53]