From Wikipedia, the free encyclopedia
Jump to navigation Jump to search
Extratropical cyclone which caused severe damage to Europe in February 2020, with 13 fatalities

Storm Ciara,[b][c] was a powerful and long-lived extratropical cyclone that was the first of a pair of European windstorms to impact the United Kingdom and Ireland at peak intensity less than a week apart, followed later by Storm Dennis. Ciara caused widespread wind and flooding damage across Europe, and at least 13 fatalities.

The system emerged into the North Atlantic and underwent rapid intensification; the first severe weather warnings were issued for the United Kingdom and Ireland on 4 February well in advance of the storm's arrival, and it was officially named Ciara by the Met Office the following day, becoming the twelfth named storm of the 2019–20 European windstorm season. Ciara subsequently made landfall in northern Scotland on 9 February and Norway the next day.

Precursor low Kade brought heavy snowfall to the northern United States and eastern Canada, especially Newfoundland, New England and New York; further south in the Mid-Atlantic and Southeastern U.S., flooding and tornadoes were reported.[2] The worst effects from Ciara were felt in Ireland and the United Kingdom, where the storm arrived over the weekend of 8–9 February, bringing high winds and heavy rainfall that caused severe damage, widespread flooding and three fatalities in the latter country.[3][4] As Ciara moved across northern Europe with an unusually large wind field, eight further fatalities were recorded in a wide range of countries in mainland Europe, including as far away as Slovenia.

On 4 February, the Met Office issued a yellow warning for wind for the following weekend for a potential storm, covering all of the United Kingdom. At the time, no name was issued for the system involved. The storm was formally named Ciara by the Met Office in the United Kingdom,[5] Sabine by the Deutscher Wetterdienst in Germany,[6] and Elsa by the Norwegian Meteorological Institute in Norway.[7]

It formed out of a weak area of low pressure emerging into the Atlantic Ocean from the southeastern United States earlier that day; the precursor system had previously brought heavy snowfall to large tracts of the United States and Eastern Canada, while tornadoes were reported across the southern and mid-Atlantic states.[8] The precursor system further developed over the northeastern United States, bringing 80 mph (130 km/h) wind gusts to coastal New England on 7 February.[9]

A trampoline on the tracks at Chelsfield.
Storm damage in the United Kingdom

On 4 February, the Met Office issued a yellow warning for wind for the following weekend for a potential storm, covering all of the United Kingdom. At the time, no name was issued for the system involved. The following day, the storm was formally named Ciara by the Met Office. For 9 February, an amber wind warning for much of England was issued, with the rest of the United Kingdom remaining under a yellow wind warning. The agency forecasted wind gusts of 50 to 60 mph (80 to 97 km/h) across the country, with the possibility of gusts up to 80 mph (130 km/h) along coastal regions.[10][11]

On Sunday 9 February, heavy rainfall from Ciara caused severe disruption across the British Isles. As a result, the Environment Agency issued 186 flood alerts, 251 flood warnings and 1 severe flood warning in England.[12] The severe warning, which was later withdrawn, was issued for the River Nidd at Pateley Bridge where a water level of 5.1 m (17 ft) was expected to pose a "danger to life" and overtop flood defences. In the United Kingdom as a whole, around 539,000 people were also left without power due to the storm.[13] The strongest gust recorded was 97 mph (156 km/h) at The Needles on the Isle of Wight.[5] The highest rain total was at Honister Pass in Cumbria, where the Environment Agency recorded 179.8 mm (7.08 in) of rain over the weekend.[11]

High winds created by Storm Ciara over the United Kingdom and the North Atlantic meant that a British Airways Boeing 747-400 broke the record for the fastest subsonic flight between John F. Kennedy International Airport in New York City and London Heathrow. The aircraft was propelled by a strong tailwind and the jet stream across the Atlantic, completing the journey in 4 hours and 56 minutes. During the flight, the aircraft hit a maximum ground speed of 825 mph (1,328 km/h) and arrived 78 minutes ahead of schedule.[14] Alongside two Virgin Atlantic flights which arrived around the same time, it surpassed the previous world record of 5 hours and 13 minutes, set by a Norwegian flight in January 2018.[15][16]

On 10 February, a 58-year-old man from Micheldever, Hampshire, died after a tree fell on his car during the storm, where wind speeds were estimated to be in excess of 60 mph (97 km/h).[17][18] The following day, a 77-year-old man from Clydebank, West Dumbartonshire, in Scotland, was killed after falling on ice and hitting his head.[19] A man also died in Woolton, Liverpool, due to a tree branch falling in high winds.[20]

On 11 February, a major incident was declared in Cumbria due to problems with water supply following the storm. A 100 m (330 ft) section of the water main was damaged according to United Utilities, who had detected higher than normal levels of chlorine in the water. Twenty water tankers were placed on stand-by on bridges across the M6.[21] More than 20 schools in the Penrith area were consequently closed, and approximately 5,000 households had poor pressure or no water due to the damage.[22]

On 7 February, Ronaldsway Met Office issued an amber weather warning for the island for 8 and 9 February, ahead of the arrival of Storm Ciara. A yellow warning for coastal overtopping and a yellow wind warning were also issued.[23] In preparation for the storm, the promenades in Castletown, Laxey and partially in Douglas were closed the following day.[24] Isle of Man Steam Packet Company (IOMSPC) ferry sailings between the island and Heysham were cancelled between and including 8 and 11 February, resulting in no newspapers being delivered to the island.[25][26] Severe gales on 9 February led to fallen trees in Smeale, Braddan and Colby, and a power outage in the Andreas area.[27] For 11 to 12 February, a yellow warning for "icy patches and wintery showers" and a yellow warning for coastal overtopping were issued.[28]

On 8 February, the opening ceremony for the 2020 European Capital of Culture in Galway was cancelled.[32] The following day, almost 3,000 homes and businesses were affected by power outages. Severe flooding disrupted travel, including roads in Geevagh and Riverstown in County Sligo. The N80 through Port Laoise in County Laois was also made impassible due to flooding.[33] Many soccer matches including the 2020 President of Ireland's Cup, Gaelic Athletic Association (GAA) games and racing were postponed or cancelled due to the arrival of Ciara.[34]

Closed coupure doors in Bremen, Germany in preparation for the storm on 10 February.

On 7 February, the Deutscher Wetterdienst formally named the storm Sabine in Germany.[35]

On 9 February, wind speeds exceeded 140 km/h (87 mph) in the Harz mountain range, and 120 km/h (75 mph) in Kiel.[36] On the same day, around 150 flights to and from Frankfurt Airport were cancelled, according to its operator Fraport.[37] Flights to and from Munich, Cologne, Hannover, Berlin, Düsseldorf and Bremen were also affected.[38] The Bundesliga football match between 1. FC Köln and Borussia Mönchengladbach scheduled to take place was postponed due to the storm.[39]

In preparation for the storm's impacts on 10 February, a further 130 flights scheduled for this day were also cancelled.[37] Lufthansa stated that it would cancel short-haul and long-haul flights until 12:00 GMT and 13:00 GMT, respectively.[37][40]

One person in Lower Saxony died.[41] 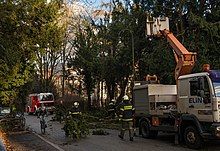 Windthrow in Linz, Austria on 10 February. Fallen trees accounted for a large proportion of damage from the storm in Austria.[42]

On 9 February, the Central Institution for Meteorology and Geodynamics (ZAMG) issued the second-highest storm warning level for north Vorarlberg, North Tyrol, Flachgau, large parts of Upper Austria and Lower Austria and Vienna.[43] Parks in Salzburg, Sankt Pölten and Vienna were closed as a precautionary measure.[44]

The following day, the institute observed 149 km/h (93 mph) wind gusts on Hinterer Brunnenkogel in Tyrol, Austria.[42] Infrastructure damage, windthrow and transport disruption accounted for the majority of the disturbance caused by the storm.[42] Rail replacement services were put in place in Salzburg between Oberndorf and Lamprechtshausen, due to a tree falling onto tracks.[45] Around 35,000 households were also left without power due to the storm.[46][47]

In preparation for the Ciara storm, 35 French Departments have been placed in orange alert.[48][49]

On 10 February, three people died in Bukowina Tatrzańska after being hit by a wooden structure in high winds.[51]

On 11 February, a woman died after being hit by flying roof debris in Traona in Lombardy.[52]

On 10 February, the unusually low pressure from the storm led to multiple flight cancellations, as some aircraft were unable to compensate their altimeters.[53]

Flooded parking lot during Storm Ciara in Lysekil, Sweden, where sea level was approximately 100 cm (39 in) above average.[54]

On 9 February, winds of around 25 m/s (90 km/h; 56 mph) were recorded on the west coast of Sweden. The previous day, several class-2-warnings had been issued by the Swedish Meteorological and Hydrological Institute. Rail services in the west and south of the country were cancelled due to a risk of track obstruction. Multiple ferries between the mainland and Gotland were cancelled, Uddevalla Bridge was closed and warnings were issued for Öland Bridge and Øresund Bridge. The wind also caused water levels to fluctuate significantly, with above average levels recorded in Bothnian Sea and Bothnian Bay and below normal in the south Baltic Sea.[55]

On 10 February, sea level along the Swedish west coast were the highest in 34 years, in some areas as high as 137 cm (54 in) above average. Roads and parking lots were flooded and ferries were cancelled due to too high water level at their docking stations.[56][57]