Don't be inconsiderate. If people abided by this, we wouldn't need any other policies about behaviour. If the community is telling you that you are being inconsiderate, then please reflect on your behaviour. Continuing to behave in a way that people are telling you is inappropriate or disruptive leads to problems. For you, for the community, and for Wikipedia.

Being right about an issue does not mean you're not being inconsiderate! An inconsiderate person can be right – but they're still inconsiderate; if there is something in what they say that is worth hearing, it goes unheard, because no one likes listening to inconsiderate people. It doesn't matter how right they are.

Coping with being labeled inconsiderate[edit] 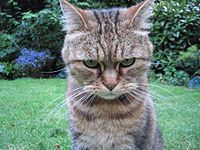 This kitty looks like it woke up on the wrong side of the cat bed. But don't write that on this kitty's Talk Page.

If you have been labeled as inconsiderate, especially if you have been told this by several people in a particular community, it might be wise to consider the possibility that it's true. If you suspect that you may be inconsiderate, the first step is to become aware of it. Ask yourself what behaviour might be causing this perception. Try changing your behaviour and your mode of presentation. In particular, identify the harsh words in your communications and replace them with softer ones.

Honestly examine your motivations. Are you here to contribute and make the project good? Or is your goal really to find fault, get your views across, or be the one in control? Perhaps secretly inside you even enjoy the thrill of a little confrontation. This may not make you a bad person, but to everyone who is busily trying to build something great, you become an impediment. People get frustrated, rancour ensues, the atmosphere changes, and the whole project suffers. Are you here to give, or to take?

If appropriate, publicly apologize to anyone to whom you may have been abrasive and inconsiderate. It is okay; this will not make you seem weak. On the contrary, people will take notice of your willingness to cooperate and will almost always meet your efforts with increased respect.

Telling someone "Don't be inconsiderate" is something of an inconsiderate move in itself, so don't bandy the criticism about lightly.

Telling someone "Don't be inconsiderate" is generally inconsiderate — especially if true. It upsets the other person and reduces the chance that they'll listen to what you say.

Focus on behaviour, not on individuals. Say what you want and why you want it. Say why you think the other person's behaviour is counter-productive. Assume good faith to the maximum extent possible. If you don't understand why someone is doing something, ask. Don't rush to complain until you are sure that good faith negotiations can't work. Understand before insisting on being understood.

Remember that your perception can be wrong. If the other person is writing in an unfamiliar language, or has a different cultural background, you may misunderstand their intentions.

Above all, be genuine. Don't ask questions when you know the answer. Don't say you want one thing if you want another. Don't try to persuade people of things that aren't true. Do not respond to inconsiderate behaviour by being inconsiderate yourself.