From Wikipedia, the free encyclopedia
Jump to navigation Jump to search
"WP:BEAR" redirects here. For the WikiFauna, see Wikipedia:WikiBear. 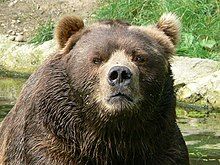 Does he look like he wants to be poked? 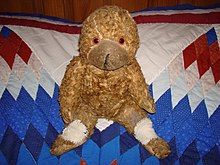 Even the more harmless-looking variety might not appreciate being poked.

Bears are lovely creatures that often hibernate and are, for the most part, non-violent. However, when poked, bears can become quite angry. As such, it's always best not to poke the bear.

This metaphor could mean more than you intended[edit]

Be careful not to imply that a specific individual is a bear. In Russia "bear" may be a compliment, but elsewhere(OED) it can mean a rough or bad-mannered person and "like a bear with a sore head" means very irritable. Using "don't poke the bear" to hint that an editor is over-sensitive on a subject might not be true, and could be construed as a personal attack. You might also offend fellow editors if they think you are accusing them of "bear-baiting" – a bloodsport which involved setting dogs to attack a captive bear.(OED) "Bear" is also a slang term for a big, hairy gay man.