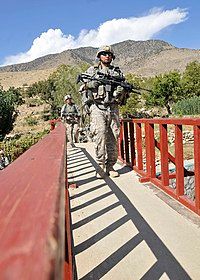 Following your squad leader is important when you are a soldier. In Wikipedia AfD discussions, though, don't just follow the "leader"–the editor who makes the first comment or is the nominator of the article.

Follow the leader occurs during a deletion discussion (such as an AfD), when the first editor to comment on the board, or in some cases, the nom, gives their opinion, and then most editors who give their opinions thereafter are strongly influenced by that first comment. The majority of comments thereafter mirror the first, and this gives a skewed view of the true consensus among those who are familiar with the topic, and especially the creator and other editors who have made major contributions to the page, who are really the ones who can best make a judgment. The result is that any additional editors making comments, and ultimately, the closing administrator's positions are influenced by this majority rather than the valid points a minority of those who have participated in the discussion, who are often just the creator or the main contributors, have made.

According to Wikipedia guidelines, an AfD discussion is not a vote. The final decision is made based on the points made by those participating in the discussion and their congruence to Wikipedia's existing policies. The purpose of making a comment on an AfD board is not to make a vote as to whether or not to keep or delete a page, but to help the Wikipedia community and ultimately a closing administrator interpret Wikipedia's guidelines in reference to whether the page should or should not belong.

It is with this in mind that if ten editors state an article should be deleted and only one states that the article should be kept (or vice versa), but that single editor has really good points that, in congruence with Wikipedia policy, show a good reason this should be the outcome, but the comments of the other ten fail to do so, the opinions of that single editor are supposed to stand.

Therefore, editors who participate in an AfD discussion should not be swayed by how others have commented, but rather, should provide their own ideas based on their own knowledge of existing Wikipedia policy or their own beliefs on how Wikipedia policy should be.

When commenting on an AfD, please keep the following in mind: