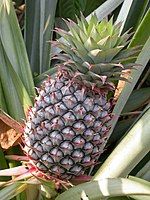 All agree that all living things, including the pineapple, are notable. While they may have articles, Wikipedia guidelines still require all information contained in the articles, be verifiable—and that if no information can be verified in independent sources, that the article be deleted or merged away, no matter what the subject is.

Inherent notability is the idea that certain subjects on Wikipedia qualify for articles on the English Wikipedia merely by the nature of their subjects, and without considering whether the subjects meet the Wikipedia's notability guidelines for inclusion or whether any material on the subject can be verified. The contrasting view argues that nothing is inherently notable since notability requires verifiable evidence and is not conferred by association with other topics.

The word inherently means that, by the nature of the subject, it intrinsically belongs in a given group, regardless of any other considerations. Notability in wikijargon is a claim, based on WP:N, about whether an article belongs in the encyclopedia. To say that a subject is inherently notable, then, is to say that the subject intrinsically belongs in the encyclopedia, regardless of any other considerations—even including such critical considerations as whether or not it is possible for the resulting article to comply with the core content policies of Wikipedia:Verifiability, Wikipedia:No original research, and Wikipedia:Neutral point of view.

What makes a members of a category "inherently notable" or "not inherently notable" is really the way they tend to be viewed by the Wikipedia community. A sense of this can be given in Wikipedia:Articles for deletion/Common outcomes. There are some topics for which editors have accepted all member subjects as notable, e.g. census designated places. Every geographic area used by the census bureau in the United States now has an article on Wikipedia whether or not it is the subject of "non-trivial coverage by multiple sources".

On the other hand, there are other topics for which not all member subjects are considered to be inherently notable. For example, bands are only viewed as notable if they seriously are shown to meet Wikipedia's inclusion guidelines. A significant number of articles that are deleted are those about bands.

The major difference between a subject that is "inherently notable" or not is the likelihood there is for it to remain if it has been written lacking sources. Though guidelines technically do require all information to be sourced, the existence of an unsourced article is really a test to a subject's inherent notability. A subject that is inherently notable will likely remain upon discovery by a deletionist if not sourced, either being completely untouched, or by having various templates added to note its issues. One that is not inherently notable will likely face deletion.

Common examples tend to be found in geography based subjects, where all cities, towns, schools, and certain other subjects are considered by some to be entitled to articles. This belief is fostered by the fact that these are public institutions essential to communities and masses of individuals in their own way. It is asserted that the articles have a right to exist, even if they are not the "subject of multiple, reliable, independent, non-trivial, published works", as the articles can be sourced to publicly available data, for example census data.

In the case of schools, the argument is that they play a dominant part in a person's formative years. They are generally fixed in location, and often have long histories. They are likely each to attract substantial communities of interest to Wikipedia. An average US high school, for example, may have been founded in 1970, with an average class size of 1000 people. It may serve a city of 70,000, where each citizen is likely to know it exists. It may be known across the entire US state, and well-known by adjacent towns, such that perhaps at least 350,000 people know of it and have reason to search for it. 350,000 potential searchers is good enough, arguably, to establish inherent notability.

Some Wikipedians recognize certain other topics as having inherent notability. This gives them a right to exist in the main article space. While their existence may very well go unchallenged, all data within the articles must still be verified and referenced.

If others consider a topic "worthy of note" by writing about it in an independently published book or magazine, then we as Wikipedia's have proof that it should be considered notable; if no one has written about a topic in a published work, then notability may be difficult to gauge. We can argue that X or Y are notable or non-notable at all, but the only evidence we can present to buttress our arguments is the presence or absence of reliable sources.

Unfortunately, too often this definition of notability is misused.

Whether some topics are or are not inherently notable is, on Wikipedia, irrelevant. The standard way of demonstrating notability involves showing that others have deemed it worthy of being written about. Sources themselves do not establish notability, but they prove notability.

Some sorts of articles will, by definition, meet Wikipedia's basic notability standard of non-trivial coverage by multiple-sources and long-term importance. For example, in the United States, places listed on the National Register of Historic Places will inherently meet this standard, as inclusion on that list requires third-party, published documentation of a place's importance, and all NRHP listings, with detailed information on the listed place, are published. Thus, any place listed on the register will inherently have enough sources to meet Wikipedia's inclusion guidelines.

Obvious notability describes when few or no references are placed within an article and given this fact, the subject is not asserted to have met notability guidelines. However, the article is about a subject that is so well-known that everyone views it as notable, and therefore, no one is likely to ever challenge its presence.

For example, no one would challenge articles about the Atlantic Ocean, George Washington, or tigers, even if there were zero sources. Everyone knows the Atlantic Ocean is an important part of our planet, and that it belongs in an encyclopedia.

Just because a subject is obviously notable does not mean an article about the subject meets all of Wikipedia's guidelines. Such articles have numerous problems. These include, but are not limited to, neutrality violations, the possibility of containing original research, or sneaking in intentional inaccuracies. For biographies of living persons, regardless of how much they may be seen by society as being worthy of having articles, it is especially important that all information be accurately sourced.

Additionally, the parent subject may be clearly notable. But this does not guarantee that every article pertaining to this subject is worthy of inclusion. Strict guidelines pertain to writing such sub-articles of a parent article, not just out of notability concerns, but also due to the possibility of a POV fork.

De facto notability describes when an item is not identified in Wikipedia's existing policies as inherently notable, but an article on that item, if created, is not likely to be challenged, or, if proposed for deletion, is likely to survive. De facto notability is distinct from obvious notability in that the subject itself may not be household vocabulary, but the category to which it belongs is well known.

Items with de facto notability are very likely to survive a deletion proposal, even when lacking a list of references that describe them as notable. Still, notability of a subject is not a free pass to write whatever you wish about a subject, and, for the same reasons as described above, it is especially important that all content be verifiable.