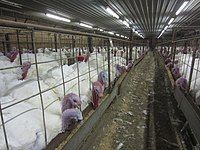 When Wikipedians are editing articles about controversial topics, such as factory farming, they often need to deal with sources that are reliable, but non-neutral.

On controversial topics, Wikipedians often need to deal with sources that are reliable but non-neutral. The best solution to this is to acknowledge that a controversy exists and to represent different reliable points of view according to the weight that reliable sources provide. Intelligent readers will weigh the opposing sides and reach their own conclusions.

Reliable sources may be non-neutral[edit]

One of the perennial issues that arises during editor disputes is how the neutral point of view policy interacts with the reliable sources guideline. Arguments often arise which contend that a given source ought to be excluded as unreliable because the source has an identifiable point of view. These arguments cross a wide variety of topics and stem from a common misunderstanding about how NPOV interacts with RS. The neutral point of view policy applies to Wikipedia articles as a whole: articles should reflect an appropriate balance of differing points of view. The reliable sources guideline refers to a source's overall reputation for fact-checking[clarification needed] and reliability--not the source's neutrality. Reliable sources may be non-neutral: a source's reputation for fact-checking is not inherently dependent upon its point of view.

A frequent example that arises in this type of discussion is The New York Times, which is the leading newspaper of record in the United States yet which is sometimes said to reflect a left-wing point of view. If that presents a problem within article space, the problem is not reliability. The appropriate Wikipedian solution is to include The New York Times and also to add other reliable sources that represent a different point of view. The Wall Street Journal and National Review are reliable sources that present right wing points of view. Left-leaning The Village Voice might also be cited. The appropriate balance can be determined from the undue weight clause of the neutrality policy. Overall, good Wikipedian contribution renders articles objective and neutral by presenting an appropriate balance of reliable opinions.

It requires less research to argue against one reliable source than to locate alternate reliable sources, which may be why neutrality/reliability conflation is a perennial problem.

This phenomenon is global rather than national. For instance, with regard to Middle East politics the Jerusalem Post presents a view of events that is distinct from Al Jazeera. Generally speaking, both sources are reliable. When these two sources differ, Wikipedian purposes are best served by clearly stating what each source reported without attempting to editorialize which of the conflicting presentations is intrinsically right.

Most Wikipedians see peer-reviewed journal articles as the holy grail of reliability. The fact of the matter, however, is that no article written in any decent journal has ever been "neutral" in the bizarre sense in which Wikipedia uses that word. (However, peer-reviewed journal articles do use neutral sources as support for points which do not constitute original research.) The goal of scholarship (as represented by scholarly publication) is to make points and then defend them (or in some cases attack them). Scholars engage in expanding the boundaries of knowledge, by advancing their own claims as true; "neutrality" is not even part of the calculus. (However, original claims are "advanced as true" by means of building logical arguments atop consensus facts which are already well-supported by multiple neutral sources. The original claims are presented in a neutral way, by appealing to the neutrality of the axioms of logic itself.)

Academic papers may present the "best case" for their own conclusions, and some are later refuted either partially or in their entirety, either due to faulty methodology, or as new research is done to improve on the results. It is very difficult for the expert to distinguish good research from bad[why?], and utterly impossible for the amateur. There are no neutral arbiters who weigh the claims of competing research programs and declare a winner, and the peer review process certainly does not help here. Different journals have their own biases and loyalties. A paper submitted to one journal might well be acclaimed as excellent, but while another journal would reject it out of hand, particularly in divided fields (consider, for example, the American-British divide on IPE. A paper that would be well received in many British or European outlets would be rejected immediately at International Organization).[citation needed][example needed]

There is no such thing as objective data[edit]

As Horace Miner's deeply satirical 1955 "Body Ritual among the Nacirema" paper showed the very model a scholar uses can affect both the data and the conclusions derived from that data. In that case it was shown that if you went in with the mindset that you were observing a primitive magic-believing culture that is what you would find...even if the culture was in reality the then-modern United States.

James Burke's entire The Day the Universe Changed demonstrated how the very model (or "structure" as Burke calls it) being used can establish what is even accepted as "valid" data. In one example he talks about how French stories of "these here rocks falling from the sky" were dismissed...until the Revolution which put the peasants in charge and suddenly their folk stories became "vital astrophysical data". In another example, Burke points out that one reason that the Piltdown hoax lasted as long as it did was that the structure of the time expected that the brain would develop first. It is no coincidence that Piltdown's eventual exposure occurred when fossil discoveries revealed that standing erect came first.

Textbooks fulfill a function similar to Wikipedia: they provide an overview of debates without becoming enmeshed in them.

There are, however, sources that are designed to fulfill a function similar to Wikipedia: to provide an overview of debates without becoming enmeshed in them. These sources refrain from the cornerstone of academic work (forming and defending controversial hypotheses) and instead offer a perspective on the field to students. They are called textbooks, and in the opinion of this author, their use should be encouraged above all else.

Other sources, often rejected on Wikipedia as being of lower quality than journal publications, are also better suited for neutrality. Popular books, and journalist accounts, are generally more neutral and inclusive than scholarly discourse [citation needed]. In general, they also provide context that is more accessible to the non-specialist. Scholarly work often presents open disputes as if they were settled, though both readers and writers know they are not, simply to avoid engaging in debate on that issue; the work is taking the position of a certain research paradigm and proceeding from there (articles in the security studies literature, for example, often take realist assumptions as if they were universally shared). To the specialist, it is obvious what is being done. To the amateur, it may appear from reading such literature that the point is uncontested. Journalists, on the other hand, at least when they do their jobs well, understand that their readers may not have extensive background knowledge and explicitly explain the implicit understanding that scholars share.