Subjective importance is when a subject is perceived as being notable by seeming important or appearing to stand out to a person or group of people. A common misconception about notability is that importance or uniqueness equals notability. But some things that are assumed to be important lack sources that are required by Wikipedia in order to meet the general notability guidelines or other inclusion criteria. Therefore, they are not included.

A subject may be the biggest, the best, or the most well-known of something. It may be possible on this basis to argue that it should obviously be included. But without a single reliable source to verify its existence or accuracy, there is no way it can be included.

For example, a high school basketball player may be the best on their team. A pizza shop may serve the most popular pizza in town. A church may be the oldest place of worship in the region. These facts may be well known to those most familiar with these subjects. But there may be nothing published about any of this that can be used as sources for the basis of an article.

Also, certain factors that are viewed as respectable by society are likewise not automatic grounds for notability. The world has many physicians who have studied hard and save lives. But most of these physicians are relatively unheard of in published sources and are not worthy of articles. Likewise, the principal of a school or the founder of a club do not get automatic articles for their achievements.

Factors that do not automatically render notability[edit]

There are many reasons why one may believe something is notable when they are not. In many cases, these have been used in arguments to keep an article proposed for deletion, and they sometimes have worked.

Tortoises can live a very long time. But that does not make each one notable.
Shortcuts

Just because it's old, that doesn't mean it's notable.

Age is just a number, and numbers are not used to judge notability on Wikipedia. Everything and everyone has an age, and with each passing day, that age is increased by one day. That age will continue to increase as long as the person is alive, or the object still exists. At what time will that person or object be ready for an article?

If a structure that is still standing is thousands of years old, and there is a name put to it, it is likely that there will be multiple independent reliable sources ("MIRS"), about it, though these must be provided in order for the article to be written. The same goes if it has been verified to be the oldest example in existence. But there cannot possibly be an article about every living tortoise or tree on planet earth.

The older something is, the more difficult published sources can be to locate. Sources for subjects that existed before the days of the internet are more likely to be offline. While there is no requirement that sources be available online, they must be verifiable. The more clearly you cite an offline source, the less likely it is to be challenged. Remember, the burden is on the editor adding the material to provide sufficient sources.

There are many things that have reached the status of one of the above examples, yet they have never been covered in any published source, and they are nothing more than word-of-mouth. Word-of-mouth is not only insufficient for Wikipedia notability, but it may also be original research.

There are sites, such as Urban Dictionary, that more readily accept entries without proof, taking the word of the submitter as enough to make it plausible. This, in theory, can allow anyone to pass off their own creation as something long in existence. The main point of the notability guideline is to provide objective criteria for inclusion rather than subjective criteria such as importance which depend on an individual's perspective on the subject.

"WP:FAME" redirects here. For the essay "An article about yourself isn't necessarily a good thing", see WP:FAMOUS.
Shortcuts

There are many levels of fame. These include:

But notability is not temporary. What this means is that once a topic has been the subject of "significant coverage" in accordance with the general notability guideline, it does not need to have ongoing coverage, but brief coverage that ceases quickly may not render a subject notable. The one event guideline in particular discourages standalone articles for those who only received this brief coverage.

Regardless of the degree of fame, a living person or even a deceased person may only have an article about themselves if they meet notability guidelines for biographies. Brief public exposure or word-of-mouth only fame does not make one notable.

What a great work of art! I should write about this on Wikipedia. Or should I?

It is nice to have such talent. But all too often, one's talent and greatness is a matter of personal taste. Even when measured by statistics (such as the number of home runs one has hit) and recorded, it means nothing in the way of notability unless it gets published. Furthermore, every single person in any occupation at all could always simply claim to have talent, whether they've actually achieved anything encyclopedically noteworthy or not — however, Wikipedia's inclusion standards are not based on what's been claimed about a person or group, but on what can be reliably sourced as true about a person or group.

And even if a statistic is measurable by numbers, being a great feat is still a point-of-view issue. A high school sports star may not be able to score once at a professional level. A child prodigy may not grow up to be very successful. This is just another reason why sources must continue to rule over so-called "talent."

Shortcuts
"WP:RANK" redirects here. For the essay on not pulling rank, see WP:SENIORITY.

You see how ridiculous this may sound. Believe it or not, arguments similar to these have been made in AfD debates, sometimes by a majority of participants, favoring keeping the article, and in many cases, resulting in the articles being kept. But that does not make the topic encyclopedic.

Notability is not about being the biggest, the best, or the only of something. Likewise, not fitting this description does not make something not notable. Notability is about having published, non-trivial information (i.e., more than a mere mention) in multiple sources independent of the subject, and the article itself not being the first place to provide the information. No matter what, you can combine all the variables you would like, and then find something unique about every person, every business, every idea. 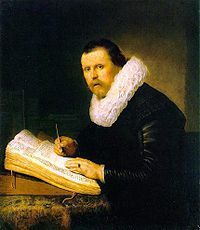 A well-educated person may seem automatically worthy of an article. But one's studies alone do not grant them one.
Shortcuts

Certain positions and titles in front of a person's name are a sign of having really accomplished something. Being known as "Dr. John Doe" or "The Reverend John Doe" or "John Doe, Attorney at Law" sounds a lot nicer than simply being called "John Doe." It is quite deserving too. Yet, there are plenty of people out there in these positions who have never received the coverage needed to be given a Wikipedia article. In fact, a very small percentage of those in such positions have accomplished just that.

While this may seem so unfair, this does not mean a person who has achieved a high academic credential in their field is unimportant, insignificant, or is being dishonored. It is just that getting a Wikipedia article–meeting WP:N–is based on information that has been published in reliable sources, and some fields tend to be better covered by reliable sources than others. Entire books will be written on relatively minor film actors or TV actresses, while professors or lawyers who have had significant careers may only merit a few articles in local newspapers.

"WP:NPROFIT" redirects here. For notability of academics and professors, see WP:PROF.
See also: Wikipedia:Wikipedia is not here to tell the world about your noble cause

It is a given. Wikipedia is not an advertising service. If you've reached this page, you probably know this by now. But the absence of seeking profit is not a free pass to having an article.

For starters, in case you have not noticed, Wikipedia does allow articles about for-profit companies, provided that they meet notability guidelines. Wikipedia has thousands of articles on for-profit companies, ranging from international corporations that are household vocabulary (e.g. Wal-Mart), to some local businesses operating a single location known mostly to those in the region (such as the Hersheypark).

Likewise, an entity that is not out there to make a profit, and is funded by taxes or private donations, or does not operate using money at all, can be excluded if it fails to meet Wikipedia's general notability guidelines.

One thing to be aware of is that many services operated by a national, state/provincial, or municipal government are not 100% tax-funded and do indeed solicit income via advertising, just like a for-profit corporation. For example, the United States Postal Service, as well as selling its stamps, uses televised advertising to make their offerings known. Many government-operated lotteries are run more like businesses. And political candidates are looking for donations for their campaigns, not to mention, votes. This does not exclude them from having articles, but still, all inclusion and citation guidelines must be carefully met.

You also cannot forget that the purpose of many non-profit organizations is to support some partisan, often controversial cause (e.g. NARAL Pro-Choice America, PETA). This does not rule out their ability to have articles, as many such organizations are indeed worthy of them. But it requires that any such article that is written must be based on neutral, factual information, and does not promote or oppose the cause.

Wikipedia is not a dictionary. There are many subjects that are commonplace in our lives. But the most that can be said about them is a simple definition, nothing more, no matter how hard you search. In such a case, rather than creating an article, it is preferable to link from articles that give important mention on the subect with the following: [[wikt:subject name]]. If the subject is the title of a disambiguation page, a link to the wiktionary entry can be obtained by adding {{wiktionary|subjectname}} to the top. If there is only one other use, this can be accomplished through a hatnote of {{see wiktionary|subjectname}}.

For example, the title "nice" is used for the French city Nice. On the page Nice (disambiguation), there is such a link to the word "nice," which includes the English adjective.

If one more piece of sourceable information besides the very basic definition can be included, even if the article is still a stub, it is worthy of inclusion.