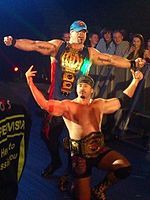 Tag teams are an important part of professional wrestling shows. But in Wikipedia, "tag teaming" using meatpuppetry to coordinate the actions of multiple editors to circumvent the normal process of consensus is inappropriate.

Tag teaming (sometimes also called an editorial camp or gang, factionalism, or a travelling circus) is a controversial form of meatpuppetry in which editors coordinate their actions to circumvent the normal process of consensus. As with meatpuppetry, editors may be accused of coordinating their actions to sidestep policies and guidelines (such as 3RR and NPOV). Unlike "meatpuppetry", the phrase may be applied to otherwise legitimate editors. The phrase comes from "tag teams" in professional wrestling, in which teams of two or more wrestlers take turns in the ring – one brings in a teammate as relief/backup when in danger of losing.

Wikipedia encourages and depends on cooperative editing to improve articles, and most editors who work together are not a tag team. Assume good faith, and keep in mind that in almost all cases it is better to address other editors' reasoning than it is to accuse them of being on a team.

Unsubstantiated accusations of tag teaming are uncivil. Care should be taken to frame assertions appropriately, citing evidence in the appropriate venues, following our dispute resolution process.

In consensus-based editing, a number of editors, sometimes with differing viewpoints, work together to craft an article that is fully compliant with Wikipedia's core content policies, such as neutrality (WP:NPOV), no original research (WP:NOR) and verifiability (WP:V). Editors may revert article changes that violate Wikipedia's core content policies; this is not tag teaming. A tag team is formed when two or more editors coordinate their edits in a way that is disruptive to an article or to the project.

There is no Wikipedia policy or guideline regarding tag teaming. Tag teaming that clearly falls under the narrow definition in this essay generally violates other guidelines and policies such as disruption or canvassing (which are guidelines). A group of editors acting in unison does NOT in itself constitute tag teaming.

Signs that may point to tag teaming include:

Potential goals of tag teams may include:

A related problem is ownership of articles. In theory, no one editor or group of editors owns an individual Wikipedia article. In practice, an article on an obscure topic will often be on the watchlists of only a small handful of editors who revert on sight any changes proposed by newcomers while insisting quite forcefully that their version is "consensus".

If the newcomer persists in editing the page, group members might accuse them of edit warring or disrupting Wikipedia to illustrate a point, target them with spurious complaints to administrators, threaten them with blocks or bans, or bluntly tell them (sometimes even in the edit summary of a revert) to drop the stick. As the benefit of the doubt is normally extended by administrators to users who have made valid contributions in the past, often little is done initially when two or three users act to chase a new contributor away from modifying "their" article. A small group thereby could succeed, largely unnoticed, in intimidating a new editor into avoiding one specific encyclopaedic subject or into leaving Wikipedia entirely.

The best defence in these cases is to seek a broader consensus. Check the edit history for others who had proposed changes to the same or similar topics, perhaps only to be reverted, and ask for their input (but avoid canvassing). Seek a third opinion from an outside or neutral source, get peer review to get an outside look at the content of the page instead of focussing on the behaviour of individual editors. Encourage others who may have an interest in the topic to add the article to their watchlists and offer their own input. Don't edit war as an army of one, but don't assume that two or three people asserting ownership of one obscure topic speak for all Wikipedians. An outside editor might be able to propose an entirely different alternative which would serve as a compromise while advancing the primary goal, which is to build an encyclopaedia.

It is always better to comment on content rather than on contributors, so calling someone a member of a "tag team" should be avoided as it is uncivil. Use of the term on article talk pages should be descriptive only. For example, it might be acceptable to offer an opinion that proper development of the article seems to be being impeded by multiple editors working in tandem. This frames concerns in terms of a general trend in editing activity, rather than as accusations against specific editors. It is generally not necessary to use the term "tag teaming" in order to deal with a dispute, though it can be an effective shorthand when describing the situation in a neutral forum such as a dispute resolution noticeboard.

Suspected tag teaming should be dealt with by sticking to consensus and other relevant Wikipedia policies and guidelines, and by going through the normal dispute resolution processes. Where at all possible, assume good faith and start from the assumption that there is not a tag team.

It is often difficult to tell the difference between tag teaming and consensus-based editing. Consequently, some editors that are failing to gain consensus for their preferred changes will inappropriately accuse every editor that opposes them of being part of a "tag team".

What should you do if accused of being a member of a tag team? The accusation may be a form of baiting that attempts to provoke you into reacting in an uncivil or otherwise undesirable way. Therefore, it is important that you:

Ultimately, don't let false charges intimidate you. Just stay calm and civil, abide carefully by all policies, and treat everyone fairly. In an ideal world, the truth of the matter should be apparent to outside observers.

It is often not possible to determine whether users are acting as a tag team or are truly engaged in consensus-based editing. However, it is particularly important to maintain a cool, calm attitude, since tag teams – and those who accuse others of behaving as a tag team – may try to generate emotional reactions to confuse the issue at hand.

No sure method can be recommended for identifying or dealing with a suspected tag team, but the following strategies have been proposed:

Note that if there are two, or more, groups of editors supporting specific versions of an article or group of articles, or even a group of editors claiming to be fighting a tag team, none, any, or all of these groups may end up acting as a disruptive tag team, so be cautious. A group of editors opposing a tag team must be careful to stay within policy, and must make genuine good-faith efforts to build consensus and to seek outside opinions. The methods of tag teaming should never be used to combat perceived tag teaming; Wikipedia is not a battleground.

Accusations of tag teaming do not give any extra rights or privileges to revert, or to otherwise act outside of policy, when dealing with those editors or their edits.

Finally, consider the possibility that you may be mistaken. While it can be frustrating when one's edits are repeatedly resisted, what looks to you like a tag team may instead be editors who are more knowledgeable about the topic at hand, more familiar with the nuances of content policies, or otherwise working within the goals of Wikipedia.

Sometimes the best way to deal with a tag team is to obtain the attention of an administrator. If an affected article is placed on probation or closer admin supervision, it will be more difficult for a tag team to be effective.