From Wikipedia, the free encyclopedia
Jump to navigation Jump to search
Essay about the preservation of knowledge
See also: Wikipedia:There is no deadline and Wikipedia:The deadline is now 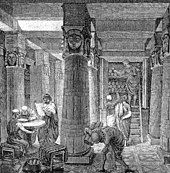 The lost Library of Alexandria, only one of many destroyed libraries in antiquity, lost long before Wikisource had a chance to save their contents

Practically every day, distinct forms of knowledge are lost forever and no copies are available. When a natural disaster hits a region or a war breaks out, libraries, archives, museums, monuments and other artifacts of heritage, valuable buildings, incunabula and unique objects are destroyed or face the threat of destruction. These events usually remove pieces of human knowledge and sometimes entire cultures.

There are plenty of examples of permanent loss of knowledge before Wikipedia's existence. The following is a non-exhaustive list.[1]

Unfortunately, the destruction of knowledge has not ceased with Wikipedia's inception in 2001. Here are a few examples.

Damage in Duchess Anna Amalia Library after the fire 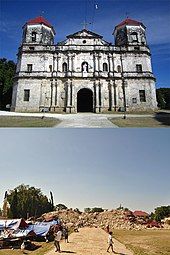 Loon Church, Philippines, before and after the 2013 Bohol earthquake

The current coverage of Wikimedia Commons is imbalanced (5.2M geolocated images in the map). We must preserve the current world to the future generations. Imagine a project like Geograph Britain and Ireland[44] but globally.

Today, many of the world's languages are endangered or nearly extinct.[45][46] In some cases where parents have stopped teaching an endangered language to their children, the language is understood by only a few elderly speakers. The Rosetta Project is a global collaboration of language specialists and native speakers working to build a publicly accessible digital library of material on the nearly 7,000 known human languages.[47]

Furthermore, hundreds of websites are closed every day on the Internet; the average life of a web page is only 77 days.[48] Those websites work in many cases as references. Projects like the Internet Archive or WebCitation and volunteer groups like Archive Team[49] save copies of some of them, but many others are lost forever. This issue may affect Wikimedia projects too, and mirrors are needed to assure long-term preservation of the data.

Wikipedia and its sister projects can—and must—save all these forms of knowledge, through creating articles, uploading images and recordings to Wikimedia Commons, preserving languages in Wiktionary and transcribing books into Wikisource. Events like Wiki Loves Monuments may help to immortalize monuments around the world before they are damaged or destroyed.[50]

There is a deadline. This is a battle against time.

El Vaporcito, a famous ship in Andalusia and Property of Cultural Interest in Spain, sunk in 2011. 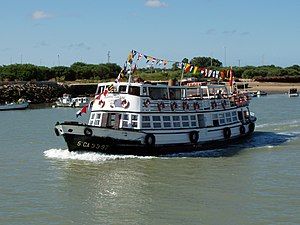 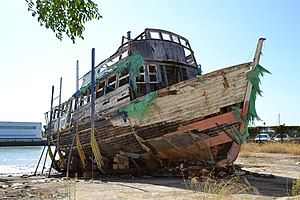