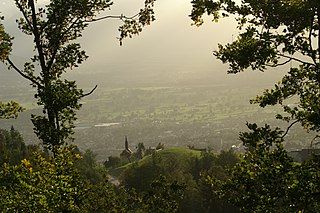 The mist obscuring this picture makes a pretty image, but Wikipedia introductions should not resemble this photo.

A vague introduction is an article lead (WP:LEAD) that begins with non-definitive or otherwise equivocal language, such that only reveals and discusses a concept's ambiguities or peculiarities, rather than its actual substance.

Examples of the wording in such introductions often resemble the form:

Philosophy articles are particularly susceptible to such vague language for several reasons:

The solution may require having separate leads for each major meaning assigned to the topic, rather than using a Cuisinart and blending all the concepts into one paragraph. The most dominant meaning should be given the first paragraph, but no significant usage should be completely omitted from the new lead.

A variant of the "vague lead" is a lead in which editors have removed all examples from the lead, so that the lead describes the topic in such a generalized way that the reader gains little information about the topic and gets no information about the most important thinkers, bands, or organizations that are associated with the topic. Sometimes this is done to avoid edit wars and accusations of giving "undue weight" to specific thinkers or organizations associated with the topic.

Y Foo subculture is a youth subculture in North America and parts of Europe that is part of the hardcore punk subculture. The Foo subculture emerged in the early 1980s. Individuals in the Foo subculture dress with distinctive styles of clothing and hair and adornment, which often include brightly colored hair, mohawks and, especially since the 1990s, very closely cropped hair; ripped jeans, combat pants or cargo shorts; PVC boots or canvas sneakers and faux leather jackets. Members of the Foo subculture generally avoid wearing leather boots, belts or jackets, because animal rights is a view that has been associated with the subculture since the 1980s[1]. Foo subculture members have various political alignments, with most members adhering to pacifism or anarchism; protesting and demonstrating about these causes is an important activity for members of the scene.[2] The Foo subculture is based around the philosophy of authenticity; members of the Foo scene who are deemed not to understand the scene's philosophies of pacifism and animal rights may be labelled as poseurs (fakes). There are a number of bands that are associated with the Foo subculture, with the most important bands being Discharge and Crass[3]. Foo subculture members have divergent views on recreational drug use; most Foo scene members believe in straight edge living–avoiding the use of alcohol, tobacco and illegal drugs; a minority, called "Hard Foos" avoid most drugs but believe that marijuana is a spiritual substance that enhances consciousness.[4]