From Wikipedia, the free encyclopedia
< Wikipedia:VisualEditor
Jump to navigation Jump to search

About
Help out
Research
Other 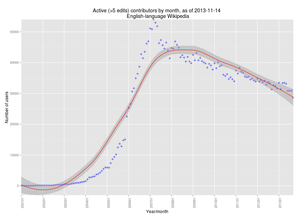 The graph above charts the retention rate for new editors over time – and the number of people we have actively editing. As you can see, it isn't positive. Wikipedia is in the middle of a crisis regarding editor numbers. We're driving away too many newcomers, and we're losing the lifeblood of any collaborative project – the contributors. What this means is that we simply don't have the people to do the work we need to be doing. Backlogs go up and up, with fewer people to handle the mountain of tasks at Special:NewPages, or the maintenance of biographies of living persons (BLPs). Featured article and good article promotions plateau as a result of not having enough people to not only write the articles, but review and maintain them. Everyone has a story of an area they work in where there just aren't enough people to get the job done.

We've got a problem, and there is a lot of speculation as to why. Some people leave because they don't want to contribute productively, which is fine. Others do so because they find the community too hostile,[1] or because they can't work out where to find help. Some people leave because editing is just too complex. Back in 2001, when Wikipedia was founded, a lot of big sites expected users to write in markup of various forms, and we were like them. Writing markup was a common skill in people who worked on the Internet, whether that was BBCode, wikimarkup or even HTML. The problem is that, in 2013, we were the only major site still using markup of this complexity.

People have come to expect to be able to use the web without learning markup. They're surprised by what they encounter when they come here, and most are not enthused by the experience. Many new users don't start off trying to make big changes; they start off trying to make small ones, and yet have to learn markup anyway just to be able to read the editing panel. They get intimidated, and they leave, as our user tests demonstrate. This need for a better way to edit is something the community has recognised again and again, as early as 2004. We're building the VisualEditor in response; because people have asked for it, and more importantly because people need it. Wikimarkup is already intimidating to newcomers, and the level of intimidation will only increase as other websites move forward. We're building it because if we don't, that graph is going to look a lot worse in five years.

Preliminary results are now available at meta:Research:VisualEditor's effect on newly registered editors/Results Note that this report is currently still a draft, and we're still in the process of analyzing all data and fully documenting the results of the A/B test.