Wikipedia:Why Wikipedia is so great 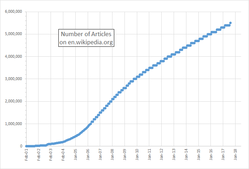 As you read and edit Wikipedia, at some point you may ask yourself: "Just why is Wikipedia so awesome? What accounts for its enormous growth and success?" In order to answer this question, some great people have written some explanations and arguments on this page. For comparison, see also why Wikipedia is not so great, and Wikipedia:Replies to common objections. You can then arrive at a well-informed conclusion thereafter.