Inclusionism is the view that information should be liberally added and retained on Wikipedia. It is espoused by users called inclusionists who favor keeping and amending problematic articles over deleting them. Inclusionists are generally less concerned with the question of notability, and instead focus on whether or not an article is factual, with merit, or useful.

Inclusionism is opposed to deletionism which supports the deletion of unworthy articles and exclusionism which involves removal of unhelpful information (and deletion of an entire article only if such removal leaves nothing behind). In other areas, inclusionism usually aligns with eventualism because both philosophies hold that articles with mixed quality of content should be retained and will be improved in time. As the size of Wikipedia grows, incrementalists may become more inclusionist as the standards for notability become easier to meet. Inclusionists do not necessarily lean toward either end of the mergism-separatism or exopedianism-metapedianism spectrums.

One of the favorite phrases of inclusionists is "Wikipedia is not a paper encyclopedia." Since Wikipedia is now on the Internet and does not have the same space limitations as a paper encyclopedia, floppy disk, CD or DVD, there is no need to restrict content in the same way that a paper encyclopedia does. Usually the AFD discussion takes up the same or greater amount of disk space than the article. It has also been suggested that no performance problems result from having many articles [1]. Inclusionists claim that authors should take a more open-minded look at content criteria. Articles on people, places, and concepts of little note may be perfectly acceptable for Wikipedia in this view. Some inclusionists do not even see a problem with including pages which give a factual description of every person on Earth.

From a deletionist or exclusionist viewpoint, inclusionists appear to be arguing for the value of material and information which is substandard, or inadequately verified; however, inclusionists counter that there is little harm in keeping material that might some day be improved as information on the topics become more widely available. Inclusionists also point out that Wikipedia is not meant to be a poor copy of the Britannica, but rather a unique encyclopedia that should exist as "the sum of all human knowledge." Furthermore, inclusionists argue that the concept of "notability", an idea that many deletionists use as a basis for selecting which articles ought to remain and which deleted, usually has no objective criteria. They argue that reliance on such a concept does more harm than good to the goals of the project.

Inclusionists may be perceived as having a greater acceptance of trivialities, small articles, non-traditional topics, and non-academic articles; this may cause them opposition by those who hold stricter views about the proper content of an encyclopedia. Inclusionists often see this project as a completely new and revolutionary way of storing and organizing all human knowledge. Some editors may object to articles and lists such as a "list of Roman cognomina", but some inclusionists strongly support such items, arguing that they are valid additions to an encyclopedia aimed at being a repository of all human knowledge. Inclusionists may feel such critics are simply suffering from the academic standards kick.

Two important prerequisites for additions to Wikipedia are that the information is correct and well placed. That last aspect requires a good structuring of Wikipedia in levels of detail, with general articles linking to more detailed 'subarticles', which in turn link to still more detailed ones, so that (ideally, eventually) on the one hand people who are not interested in certain details will not be bothered by them, while on the other hand people who are interested in them will easily find them through just a few well-placed links. If the information is not thus well placed or Wikipedia is not well structured to place the info, then that should be changed instead of removing the info. If someone finds something interesting enough to write about, then chances are that someone else will (one day) find it interesting enough to read about, so it should be in Wikipedia. If that person does not know where to place the info, then that should not stop them from putting it somewhere. Someone else will then (eventually) put it in the right place. Although of course what is the 'right place' also changes over time. If for example the info does not warrant a separate article yet, it can be kept in a higher level article, where it might become a 'seed' that attracts other related info, which together might later warrant a separate (sub)article. Such loose facts are often placed in trivia sections at the bottom of an article. Removing those seeds will stunt the growth of Wikipedia. In this area of thought, inclusionism has natural connections with (1) eventualism and (2) structurism, which seeks to build logical content containers even if some of them are still empty and will not be filled with content for some years to come. It also can be viewed as paralleling the legal standard of presumption of innocence.

As always, the dangers of factionalism should be noted, as should the likelihood that many Wikipedians are neither exclusively inclusionist nor deletionist, but mergist or some other wiki-philosophy.

Everybody, please feel free to add more arguments here! As many as possible! 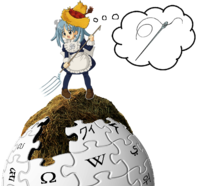 A deletionist sentiment: "Too many unnoteworthy or obscure articles impede finding the relevant stuff, like trying to find a needle in a haystack." — This notion is outdated, in part because the Wikipedia search engine was updated and improved in May 2010, in which "Search suggestions are now improved to get you to the page you are looking for more quickly," as reported on the Wikimedia blog on May 13, 2010. (link: "A new look for Wikipedia".

"We want the Demon, you see, to extract from the dance of atoms only informa­tion that is genuine, like mathematical theorems, fashion magazines, blueprints, historical chronicles, or a recipe for ion crumpets, or how to clean and iron a suit of asbestos, and poetry too, and scientific advice, and almanacs, and cal­endars, and secret documents, and everything that ever ap­peared in any newspaper in the Universe, and telephone books of the future…"